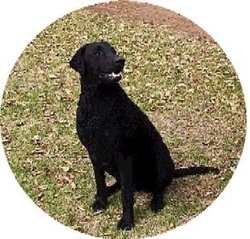 Sassy was from my first home-reared litter. At 65.5 cm /25 " she was always friendly with all people, dogs and any other animals she was introduced to.  She won her age class in all the Curly Coated Retriever Speciality shows she has attended.

Sassy's hip score was a 4 and her eyes were still  PRA clear at 7 years when the specialist stated she is clear for life.  She gained her Australian Championship title at 18 months. With numerous Best of and Runner Up of Breed awards along the way.

Sassy attained her basic obedience certificate easily at 8 months and has her Canine Companion Dog CCD obedience title. Sassy has had two litters; in  2003 with Aberbran Blackaz Yerhat a New Zealand dog and in 2005 with Sootystar Beaver a liver dog from Melbourne.

In 2010 Sassy gained her Qualifying Retrieving Dog QRD title. After many years Retrieving rabbits and wildfowl; we had a title to formalize her natural Retrieving abilities. In 2011 Sassy gained her Novice Retrieving Title NRD. Sassy commenced trialling in Restricted Trials in 2011 and was in the final 3 of eight dogs in the two trial.s she competed in.

Sassy was still fit and able at 11.2 years. She was always ready to go Retrieving either in competition or rough shooting for rabbits, Sassy had a wonderful ability to find rabbits or birds with direction; she was always a very willing team player..

Sassy at a Retrieving Trial winter  2011 about to be sent for a 'blind' retrieve. 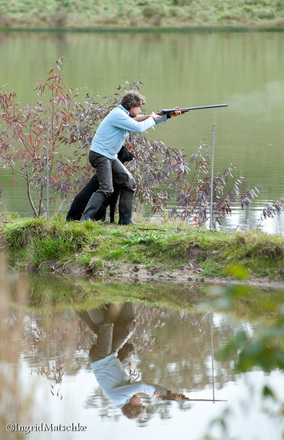 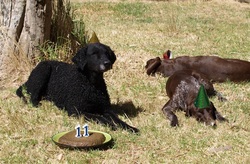 Sassy at 11th Birthday Anniversery still loving life.
Sadly Sassy passed away at 11.4 years after a short illness arising from her love of sunbathing.