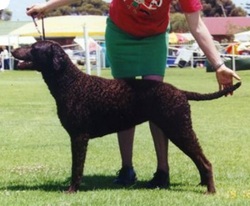 Markable Kennels began in December 21st, 1997 with my foundation bitch Champion Curltriever Got The Look CD(Ruby) . I chose Curly Coated Retrievers because of their suitability as companions while retaining their original working ability. I wanted a dog that was bred to work as a team with humans, who's original job of Retrieving could still be done and who would fit into our family life.

The aim of Markable Kennels is to promote the Curly Coated Retriever in the disciplines of Obedience, Retrieving and Showing and as great all-round family companions. All Markable dogs are temperament tested using The Guide Dogs of South Australia Puppy Assessment to ensure temperament stability. These activities and assessments show that the Curly is as well suited to the challenges of today’s society as to those of the past.

Initially I bought Ruby to participate in obedience. She flew through her basic obedience training and was often used to perform a new exercise for her classmates. Ruby gained her Companion Dog title at 23 months with a first, forth and sixth place.

I began conformation showing in April 1998 to see how Ruby would go when judged against her full sister and two half sisters. Ruby gained championship points against all her siblings while being campaigned to her Australian Champion title at 21 months.  She attained numerous Best of Breeds over many mature dogs and a Puppy in Group award along the way.

Ruby showed she had natural retrieving ability from an early age. She would ‘retrieve’ anything, as my son will attest! This talent drew us into the sport of retrieving. With a first place in her first beginners test at 8 months, we were hooked. Ruby obtained her Retrieving Qualifying Certificate at 2 years old (Judge Mr. R Davis, Victoria) and has attained a second and two thirds in Novice Retrieving Trials against dogs from all States of Australia. At this time the Qualifyind Novice RetrievingDog  title was not awarded. Ruby completed numerous Retrieving Trials gaining many passes and would be eligible for the QND title.

Ruby was retired as a companion with the Robertson family of Blackwood after we had achieved all her accomplishments; she was 14 years in December 2011, she is still active at walk time, is forever he;icopter-wagging her tail and enjoys playing under the local Park's sprinklers whenever possible.