If you have a Markable puppy/dog please contact me if you'd like to show your loved companion on my website or to let me know how he/she is. 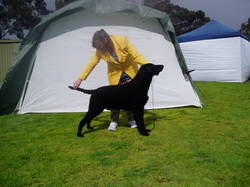 Born January 12th 2001; Plato is a black dog; he is 65 cm (25.6").
He gained his Championship title at 16 months with many Best of Breed awards. Plato attained a 17-point Best of Breed (Victorian Gundog) and an Intermediate in Show, Curly Coated Retriever Club of Victoria Show.

Plato was awarded Intermediate in Gundog Group at the 2003 South Australian Canine Association Autumn Festival. Plato’s hip score is a 2 and his eyes are clear. Plato attended obedience classes and he enjoys doing Agility and Retrieving too. Plato is a gentle clown, a real softie. He loves to meet new people, dogs and other animals. He lives with friends as a loved family pet and has holiday stays with his extended Markable family. 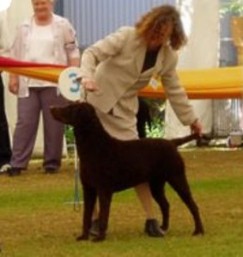 Born January 12th  2001, Meg is a liver bitch she is 63.5 cm (25").
Owned by Ken Down, she is the foundation bitch for Ken's Curlview Kennels. Meg was handled to her Championship title by Ruth Bell with many Best of and Runner up of Breeds along the way. Meg gained her Championship title at 19 months. Meg has been awarded Baby Puppy once and Intermediate of Gundog Group three times. Meg was Best Bitch and Runner up of Breed at the Adelaide Royal Show in 2003. Meg's hip score is a 6 and her eyes are clear. Meg is an effable Curly who is willing to please. Sadly Ken let me know that Meg was put to sleep in late 2011 after a short illness. 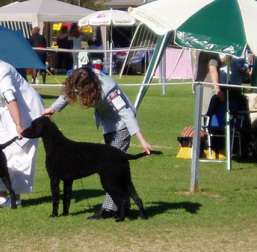 Born 18th June 2003, Ember is Sassy’s black daughter; she is 63.5 cm (25"). Her sire is Aberbran Blackaz Yerhat (Imported NZ). She entered her first show in December 2003 and gained Baby Puppy of breed.
Ember entered her first show for Championship points at 8 months where she was awarded Best of Breed (12 points). Ember attained her 100-point Australian Championship title at 14 months. She was Runner up of Breed at the 2003 Royal Adelaide Show at 15 months over 31 dogs. She gained a class in show at 2 years. Ember has lovely bone and an excellent coat. She has the typical Curly temperament being aloof, but unperturbed with strangers, she is an outgoing clown with those she knows and loves. She walks off lead daily and likes to meet and make friends with others. Her greatest joy is to swim and fetch. Ember has participated in Retrieving tests and shows she has inherited her ancestors working lines. Ember attends obedience at the Gundog Club, West Beach and attained her basic obedience at 11 months. Ember lives with the Elliott family as a loved family pet. 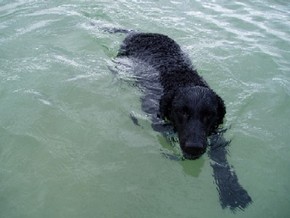 Rusty is a gentle black dog with very good bone balanced to his height of 70 cm (27 "). Owned by Leon Scott he lives at Currency Creek near Goolwa, where he likes to retrieve rabbits for Leon, or sit on the veranda overlooking Lake Alexandrina and the Currency Creek.
He entered his first two shows at 10 months old. Showing great adaptability he gained Best Dog and Junior in Group in one and Best of Breed in the other show. At 11 months and his second show, the South Australian Sporting Dog Club Show at SACA Park 2004 he was awarded a 15-point Best of Breed.  Rusty was Intermediate in Group (All Breeds Ch. Show) at 2 years. Rusty loves to go to Goolwa beach, the Currency Creek Gun Club or the Goolwa farmers markets, where he has made many human and dog friends. 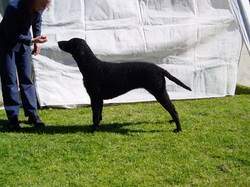 Born August 16th 2005, Calli is Sassy and Sootystar Beaver's daughter. She's 63.5 cm (25"), her hip score is 7 and her eyes are clear. Calli gained her title at 14 months, attaining all but 2 bitch challenges she competed-in during this time. She attained a Puppy and Junior of Group 3 at All Breed Championship Shows. Calli is an enthusiastic retriever, she gained her basic obedience certificate at 12 months. Her litter brother Markable Wollemikofipine CD, GD, M.A.CH, JDEx, M. OB. CH, AGSP  is enjoying himself  in Malaysia- http://www.agility-penang.com.  Calli is Champion Markable Bursaria's dam.